Fed up with the feeling of hopelessness bred by watching our world heading towards collapse and my fellow humans willfully and joyfully contributing to it, I decided to step on my bike in the middle of a harsh Austrian winter and embark on a journey of Europe to bring my testimony: “Yes, climate change and social injustice exist,” “Yes, our individual actions and our economic system are root causes,” “Yes, they have and will have disastrous consequences on our children and grandchildren.”

The voices of academics far more important than me warning humanity that immediate action is necessary seemed to me like cries in the desert given the inaction of governments in the world. The airline and meat industries, to name two examples of huge carbon polluting industries, are predicted to continuously grow worldwide in the next decades, and I see no signs that governments would cut on subsidies to the livestock industry or stop the construction of airports or additional runways.

My sentiment was to put the body of a middle aged professor (I’m 52), normally fit (not a fanatic extreme cyclist), on a bike and ride from Vienna to Milan (830 km) to attend the yearly conference of new institutional scholars, a subfield of organization and management theory. I didn’t want to just travel and talk, I wanted my very hybrid body, made of flesh and bike mechanics, to be present on the stage and bring the testimony of the urgency of the message. Riding a bike in winter is not vacation and means accepting some risks on icy, snowy, rainy roads.

The bicycle is a symbol of the distance still separating actual policies from those necessary to mitigate climate change and global social injustice. It is also a symbol of the determination that academics should have in discerning facts from fake. And it points to an idea of slow scienceand slow academycombining facts and the collegial pleasure of discovery. And indeed, after 970 kilometers on a bike, about 600 on trains, 400 on a car (from Lugano to Chamonix and back), having visited several universities in Austria, Slovenia, Italy, Switzerland and France, and held speeches on sustainability and other projects, attended a conference and a Ph.D. workshop, I discovered that the few moments of hardships were by far outweighed by many pleasures. Colleagues invited me to dine/sleep at their homes; other cyclists showed me around and the best way forward; a cook in a restaurant asked my FB-friendship proclaiming: “I immediately understood your message”; an old man in Italy gave me olive branches “because yours is a message of peace.” 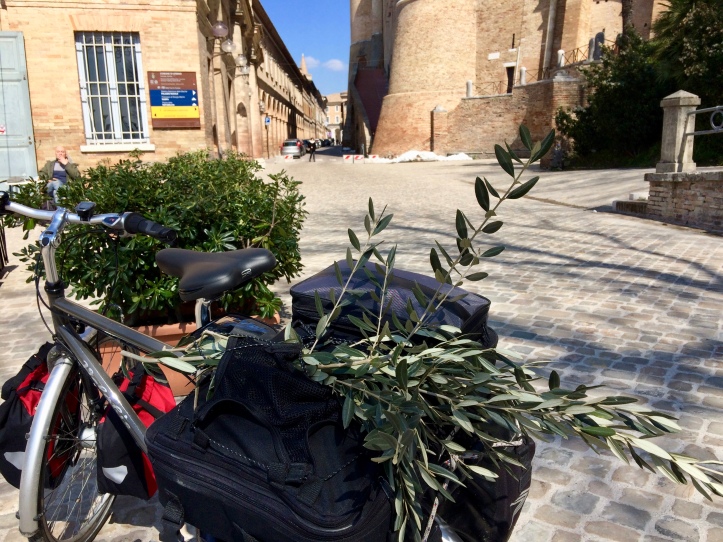 On a more professional note: Although I do not advocate that we all should bike to conferences, the two paper writing sessions I had with co-authors were the most productive since long. Biking helps to concentrate on the essentials. And flying less(or not flying at all for a year), not owning a car (if feasible), and eating less meat(or turning vegan as I did), the three requirements to participate to the Sustainability & Responsibility Triathlon, can be potent ways for walking … oops, riding the talk. 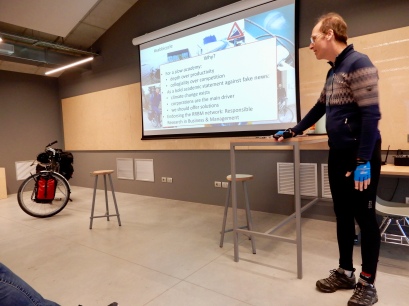 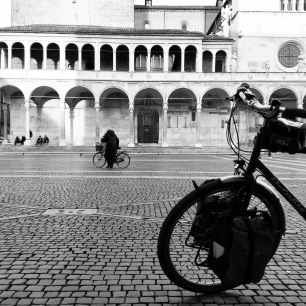